Check in often to this Happenings page to keep up with all our reunion and exhibit information.

Our reunion in Reno was so much fun!  We celebrated Naila Lampard’s 90th Birthday at the wonderful Taiwanese Street Food Restaurant called Taiwan 101.  It was authentic and delicious!  Look for pictures and details in our upcoming Bulletin. 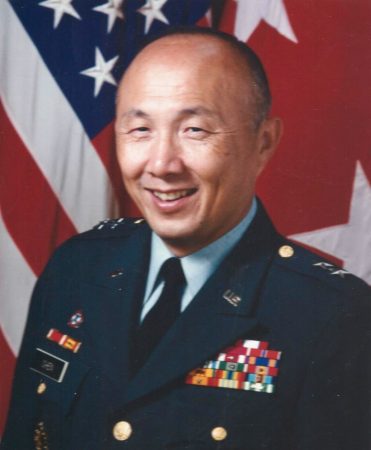 Don’t miss the opportunity to learn more about our Chinese-American veterans and their heroic contributions to World War II.  View the APAICS in Conversation webinar that was held on July 8 2020 and featured CAT member, Bill Chen – VIEW WEBINAR.  On the same subject, there is also information below about a fascinating new book, “UNSUNG HEROES”, for which Bill is Editor-in-Chief.  Bill tells us that many of the articles are written by sons, daughters, and grandchildren.  One article, “Engineering Helpers”, is about Allison P-40 AVG engine mechanics.  An article on Art Chin cites help from General Chennault when Art needed to be evacuated for his wounds.  Bill’s father, Capt. Moon Chen, is featured in an article entitled “From Railroad Workers to Flying Tigers.”  Another article is on Capt. Moon F. Chin, CNAC pilot who flew Jimmy Doolittle out of China.  Yes, CNAC had two pilots named Moon!

Bill Chen served as a career U.S. Army officer for over 32 years in the field of missile and missile defense and retired as a Major General – the first Chinese American to wear a 2-star rank in the U.S. Army.  His father, Captain Moon Chen, a pilot with the U.S. Army Air Forces, was assigned to the 14th Air Force under Gen. Claire Chennault in the China-Burma-India theater during World War II. 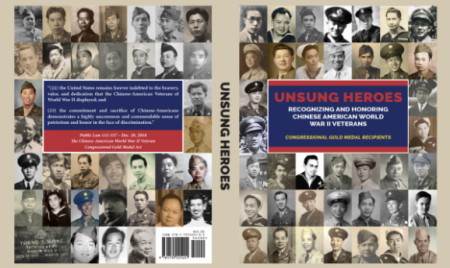 “UNSUNG HEROES” is the story of Chinese American Veterans and their contributions in World War II and the path toward recognition.  Largely forgotten, ignored, and neither recognized nor honored, the story of these Veterans is told through the writings of sons, daughters, and grandchildren of Chinese American Veterans for future generations to reflect upon the contributions of our WWII Veterans and to understand, appreciate, and preserve their legacies for generations to come.

Compiled by Editor-in-Chief, Maj. General William Chen, U.S. Army, ret., the book includes writings from authors in California, Oregon, Colorado, New York, and Massachusetts.  Chapters 1 – 5 should be of interest to all, while Chapters 6 & 7 recognize Veterans from New England and Veterans whose next of kin reside in New England.

From the inside flaps of the book cover:

This book gives long-overdue recognition and honor to Chinese American World War II Veterans, as they have been largely forgotten and ignored.  Enacted on December 20, 2018, the Chinese American World War II Veterans Congressional Gold Medal Act, Public Law 115-337, gives recognition and honors veterans with the award of the Congressional Gold Medal, the highest civilian award bestowed by the United States Congress.  As stated in public law, “their commitment and sacrifice demonstrate a highly uncommon and commendable sense of patriotism in the face of discrimination.”

Articles throughout the book highlight the involvement and contributions of Chinese American Veterans in World War II.  Articles include the impact of their World War II experience on their lives – the opening of opportunities, and their hard work and sacrifices that enabled follow-on generations to live the American Dream and be a part of Mainstream America.

Editor-in-Chief William Chen’s Vision for the book is to:

Who is this book for?

Visit their Wall of Donors

Dr. Joe Leeker has published two fascinating e-books, “The Aircraft of Air America”, and “The History of Air America”. Professor Leeker worked extensively with the University of Texas at Dallas in researching and writing these e-books. Anyone interested in CAT/Air America History would enjoy these reads.

The Aircraft of Air America  (e-book)
by: Dr. Joe F. Leeker
http://www.utdallas.edu/library/specialcollections/hac/cataam/Leeker/aircraft/index.html
This e-book lists the individual history of all aircraft ever operated by Air America including all known accidents. As the “birth date” of Air America was 31 March 1959, CAT aircraft are only dealt with if they still existed after that date.  Files of interest to readers of the CAT Association are those about the Bell 47, Goose, B-26, C-47, C-46, PBY, B-17, C-54, DC-6, and the Jets.

The History of Air America  (e-book)
by: Dr. Joe F. Leeker
http://www.utdallas.edu/library/specialcollections/hac/cataam/Leeker/history/index.html
This e-book tries to give a detailed history of Air America and its predecessor Civil Air Transport. It starts with 2 files about CAT operations in Mainland China, then deals with several aspects of CAT operations on Taiwan (structure, scheduled and charter flights, work for the US Government), then presents CAT operations “in remote countries” like New Zealand, Guatemala or Indonesia, and finally deals with operations that began at the times of CAT and still existed at the times of Air America like the Technical Services Division at Tainan, operations out of Japan (including CAT during the Korean War), operations run out of Kadena and Clark Air Bases and missions to Tibet flown by CAT and later Air America.

CAT Reunion 2022 in Reno, NV was so much fun – you can read about it in our next Bullein.

Due to the high cost of printing and postage, the Bulletin has been delivered electronically via an eNewsletter.  However, thanks to a very generous supporter, hardcopies are being sent to all members until further notice.  Please contact us at catassociation@gmail.com with any questions or concerns.  Thank you!